After a long wait, the AFL Netherlands season was able to start on August 1. Relaxation of the COVID-19 measures meant that full contact games were finally allowed again. Perhaps because everyone was keen to shake off those quarantine cobwebs, all three clubs in the Netherlands had had great training attendance in the lead up to Round 1, which proved to be a beautiful set up for a competitive day of footy.

The Delft Blues hosted the first round. Over the past few months, Delft welcomed many new members to the club. Playing together as a team for the first time, they were particularly eager to capitalize on their home ground advantage. With a whopping eleven debuts, including two guys in their first competitive game of Aussie Rules ever, they couldn’t wait to be put to the test.

The first match was between the Delft Blues and the Waterland Eagles. The Eagles, consistently growing from their base of Rugby Club Waterland, are becoming a more serious force after every game they play in the Dutch League. This round they had six debuts, of which three guys were about to play their first game of Aussie Rules.

The strong Waterland forward line made their presence known right from the bounce. With some solid goal-kicking, they were up to a comfortable lead shortly into the game. Having barely played together as a team, Delft struggled to keep up with the more structured Eagles. But the endeavor was there and, after a sloppy start, the Blues started to edge their way into the game. In the end, it wasn’t enough to close the gap and the Eagles started their season with a comfortable win. 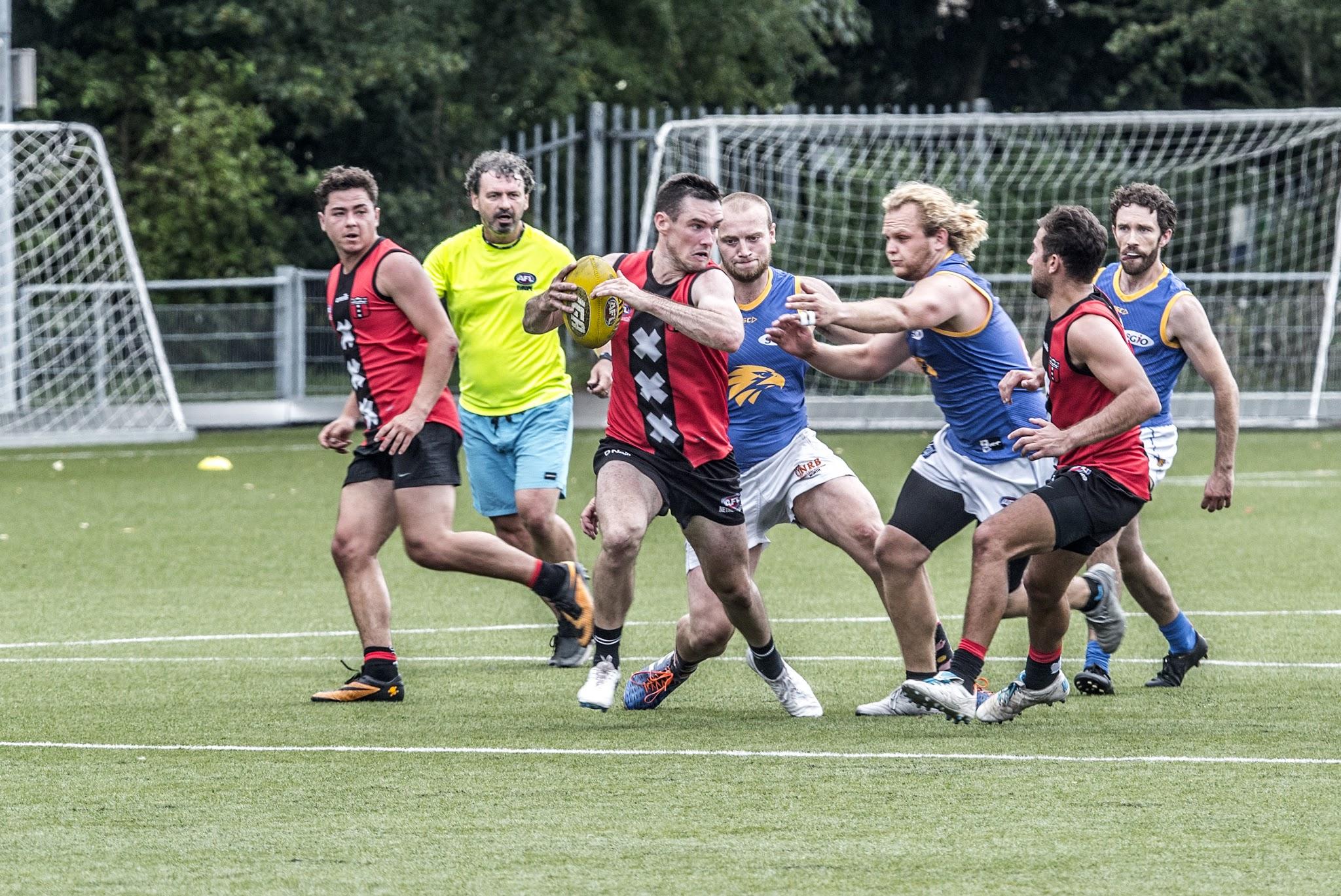 Next up, we had the Delft Blues against the Amsterdam Devils. With such a high level of skill and experience, the Devils are the team to beat this season. Alongside the many familiar faces, the Devils also welcomed a few new players to their squad. Delft were keen to redeem themselves after their first game, and already their improvement was obvious. There was not much between both teams during the first half. “We backed up strongly against the Devils, matching them to half time with a determined display of tackling and attack on the footy”, according to Delft coach Dicky Benson. During the second half though, the experience of the Devils started to shine through. Fatigue set in for the Blues and they were unable to hold back the strong Amsterdam side any longer. A solid win by Amsterdam, but the Blues proved their potential for the rounds to come.

The final game was between Waterland and Amsterdam. The Eagles were able to rest during the second game, which they hoped would work in their advantage. As with their first game, they were off to a great start with a few kicks on goal straight away. With their back against the wall, the Devils kept their heads cool. It didn’t take long for them to level the scoreboard. The spectators settled in to enjoy a close, competitive game between two strong sides. This didn’t go unnoticed by Waterland coach Tyson Vitale: “Spectators were loud and into the game!”. Until the end, it could have been any side’s game. Finally, Amsterdam managed to come out on top, winning the game by only two goals.

As Amsterdam forward Bill Johnstein summarised: “All the games were very competitive and played in great spirits!”. The Devils are still the strongest side in the Netherlands, but the gap is closing quickly. Both Waterland and Delft are knocking on the door and it’s great to see so much renewed interest in the sport by this new wave of players. It is set to be a very competitive season of footy this year, which is a fantastic prospect. 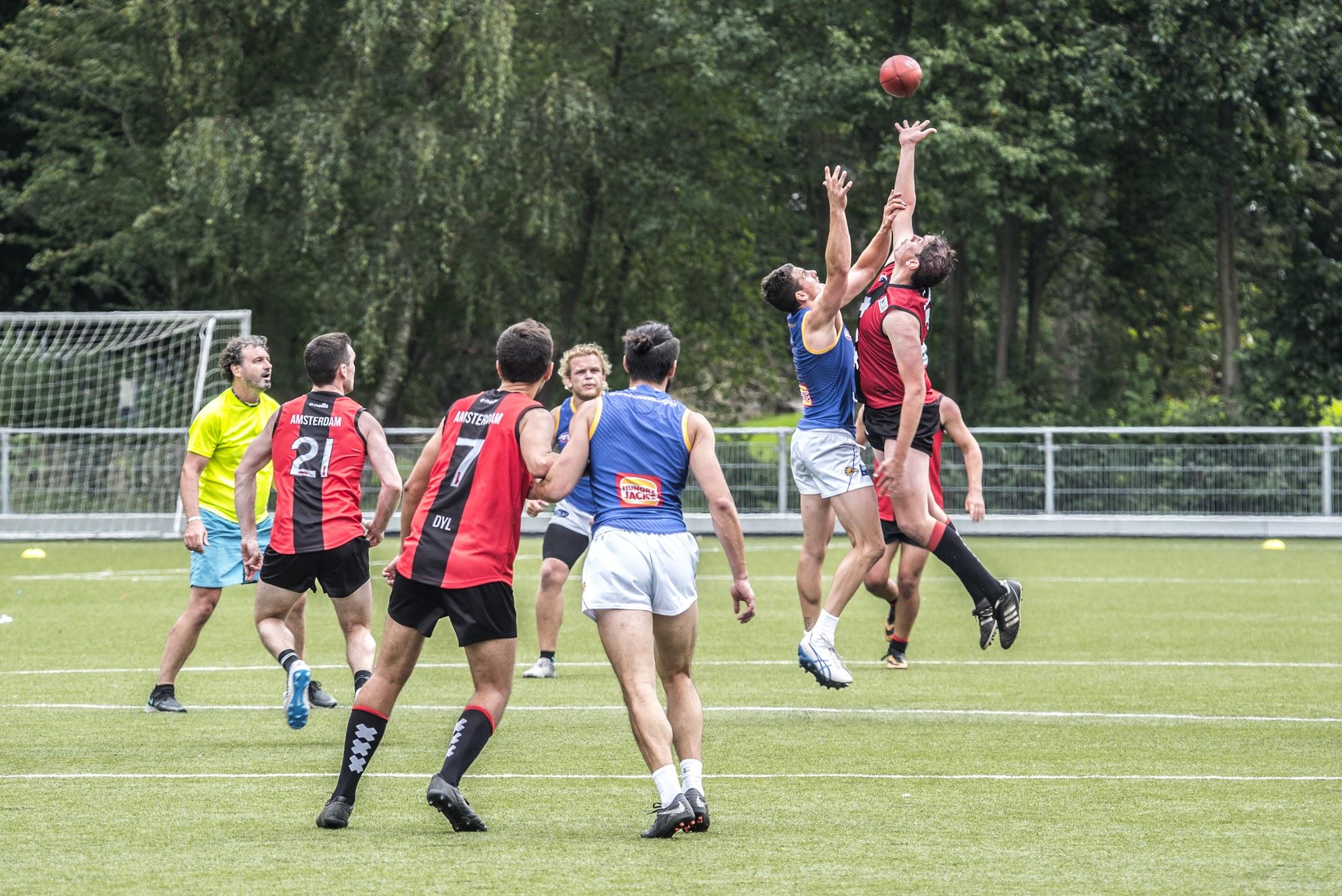 Footy is back in the Netherlands

Premiership 2020 Round 2
Scroll to top