Match Report:
After the highly anticipated start of the AFL Netherlands season in Delft two weeks ago, all three Dutch clubs came together again on the Waterland Eagles’ home ground in Purmerend. With cobwebs dusted away, and many new players already having had their first taste of footy. There were no more excuses for this round – it was game on.

The weather forecast looked promising for some nice, winter footy weather, i.e. pissing down rain. Luckily, the rain held off. Instead, the looming rain clouds in combination with the Dutch summer heat resulted in some challenging Queensland-esque humid conditions.

The first game was between Amsterdam Devils and Waterland Eagles. The Devils were undefeated in the first round, but the Eagles were eager to snatch a win at their home ground. After six debuts in round 1, the Eagles had another five debuts for round 2. With such conditions, having a large squad looked to be an advantage – and to make the big difference during the heat of the day. The Eagles came off strongly, kicking the first three goals. The Devils coming from behind, and themselves having three new players, had to rely more on their experience than they have had to for a long time. With some composed ball movement, they slowly clawed back into the game. It became a heated contest; there was not much between both sides. The young Eagles side fought hard, but the Devils’ experience made the difference at the final whistle. “The Eagles finished strongly but just fell short”, Waterland coach Tyson Vitale acknowledged. As Amsterdam coach Bill Johnstein reflected: “It was always going to be a challenge coming into hostile Eagles territory so we were very happy to get the result.”

There wasn’t much time for Waterland to be disappointed about their loss; after a short break they were up for their second game against the Delft Blues. The Blues remained mostly unchanged from round 1, giving them a chance to cement their play structures. In addition, the Blues shocked their opponents by a surprise fielding of their coach Dicky Benson (nobody expected this, considering his many physical complaints).

As is becoming a real Eagles strength, they were again off to a strong start. Right from the centre-bounce they scored the first goal. Determined to avoid a repeat of their false start against the Eagles in the first round, the Blues focused on getting the ball to their forward line. It didn’t take long for it to pay off; they turned the game around and by half time the Blues were up by three goals. During the second half, Delft lost some of their structure while trying to hold on to their lead. The Eagles slowly closed in on the scoreboard but, as the last minutes creeped by, it was clear Delft was not going to let go. The Blues clinched a tense first victory of the season. Delft coach Dicky Benson was visibly pleased with the result, as he said afterwards: “It was pleasing to see all players contributing, supporting their teammates and sticking to the game plan.”

To wrap up round 2, it was Amsterdam Devils vs. Delft Blues. Delft was hopeful to back up their strong performance from the first game. But alas, Amsterdam came strong off the bench without hesitation. The Devils had managed to take full advantage of their one game rest in between, while the Blues – ragged from the heat – were unable to keep up. The Blues’ game fell apart, and the Devils capitalized on it. The playing field levelled again in the second half, but Delft was unable to close the scoring gap from the first half. Another strong win by the Devils, who secured their top spot on the ladder. 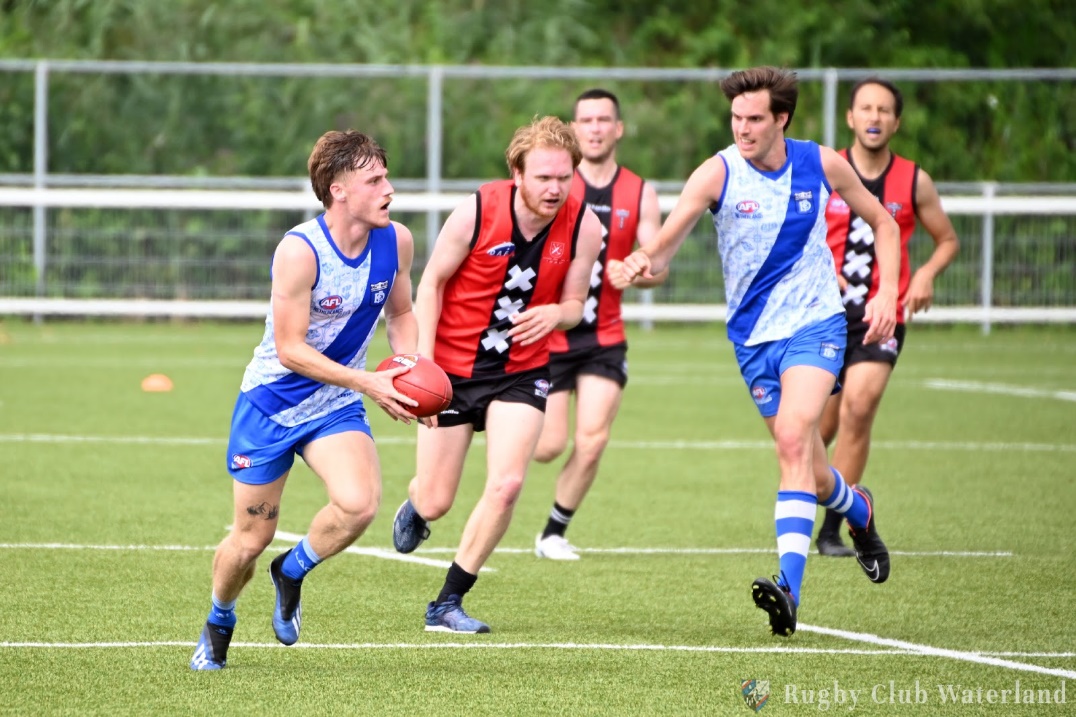 Again, it was a great round of footy. This season is becoming one of the most competitive seasons that AFL Netherlands has seen for years. Amsterdam earned their spot in the Grand Final, but the contest for second position on the ladder was broken wide open by Delft’s victory. Round 3 will be a huge contest for sure!