At first I was afraid, I was petrified. Kept thinkin’ I could never play footy again by your side.

Those are thoughts of the past now, as AFL Netherlands release fixtures for season 2021 following updated COVID guidelines from the Dutch Government.

With plenty of footy on offer, we will see four rounds of the Dutch League, a Preliminary Final, a Grand Final and the Festival of Football take place in a busy two-month window – now that’s a footy fest! The Amsterdam Devils will host two of the four rounds, with the one round each being hosted by the Delft Blues and Waterland Eagles. The Dutch League rounds will be round robin style tournament days, with each team playing the other two teams on the day and each game being split in halves, rather than quarters. Expect fast paced footy! The Waterland Eagles will host the Prelim Final, with the Amsterdam Devils hosting the Grand Final. The Prelim and Grand Finals will take place in September and will be the usual four-quarter footy. We can’t wait to see all three teams back on the field after a longer than usual break. 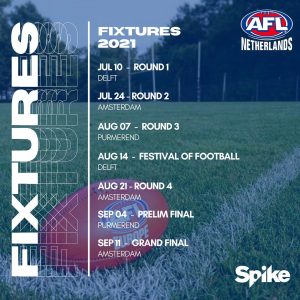 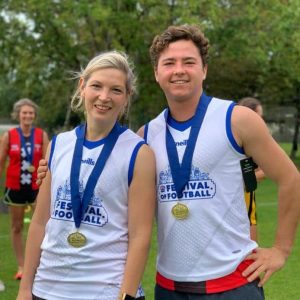 A big thank you to the AFL Netherlands League Commission who have worked tirelessly to ensure fixtures are on the calendar at all clubs over the coming months.